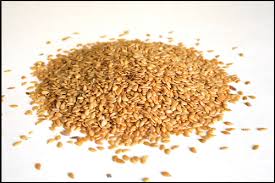 Since I have just made flaxseed focacchia this morning, I am feeling pretty smug. Flaxseed, as many of you know, is superb at keeping the bowels going when all else fails! Now here is more good news about the effect it has on high blood pressure.

Adding flaxseed to your diet could be the single most important thing to do if you have high blood pressure (hypertension). After just six months, your risk of a stroke could have fallen by 50 per cent and your heart attack risk by 30 per cent, researchers have announced this week.

Researchers from University Hospital Holguin in Cuba say that flaxseed has had the most dramatic effect of any food they have investigated for reducing blood pressure.
They tested it on 110 patients with peripheral arterial disease, most of whom had raised blood pressure and were taking an antihypertensive drug.  Half consumed 30 g of flaxseed a day from flaxseed-coated bagels, buns and muffins, while the rest had similar wheat products, but without flaxseed.

After six months, the flaxseed group saw large falls in their blood pressure readings: around 10 mm Hg in their systolic pressure, and 7 mm Hg in their diastolic levels.  These reductions could create a fall of around 50 per cent in cases of stroke, and a 30 per cent reduction in heart attack rates, the researchers estimate.
(Source: The American Heart Association 2012 Scientific Sessions, November 5, 2012, WDDTY enews Nov 12).

One Reply to “Flaxseed Best Food For #High Blood Pressure”