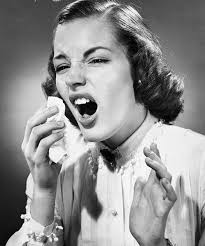 If you are anything like me, you start to dread the Summer months from about April. Despite the lovely sunshine, it brings with it the nasty P stuff: pollen! I thought I was getting away with it this year – my hayfever usually starts mid-May and I got my first symptoms 2 days ago. Milder than before but nasty none the less.

Anyway, quite a few of you have asked me about anti-histamines generally and especially since the pollen season began. I have, of course, been investigating for us all.

These seem to be the general types and they come in various forms such as tablets, nasal sprays and inhalers etc.

I doubt any of these are TGF safe. However, Clarityn D 24 hour looks a possible – I am trying to get them to provide answers on derived ingredients, especially of the hypromellose and sucrose. I will report back when/if I hear.

Update: ClaritynD 24 hour is only available in the US (US people: do check it out there and let us know!). I have asked about Clarityn Rapide and the Syrups and they are supposed to be coming back to me. A week so far… I don’t hold out much hope.

Also, in desperation one day, I got hold of some Benadryl Liquid Release 10mg Caps (cetirizine). The liquid bit looked OK but the capsule shell didn’t. I had asked the manufacturer to confirm the derivations of a couple of ingredients and they came back and said that would take 8 weeks!!

8 weeks! I laughed at her and said hayfever season would be over by the time they got their act together and that was useless to me. I also made the point about the irony of not actually knowing what ingredients are made from in allergy product. Beggars belief. I asked them to find out and come back to me so at least we know. However, not to be outdone…

I thought I would split the capsule. However, the capsules are sort of all made from the liquid so that was easier said than done. Determined, I cut the (tiny) capsule in half, licked the liquid off the scissors and put the capsule halves on a white plate. Every few minutes I lifted the capsule up and licked off the liquid that had pooled there. Result: felt daft and desperate but no hayfever and no reaction :).

I did try taking a capsule the other day but I already had a migraine (drugs from dentist) so couldn’t really tell. I thought ‘in for a penny, in for a pound’. the migraine didn’t get worse and the time it went suggests it might actually be TGF. I will have to try again but am reluctant, as per..

One more update (yes, I have been busy as usual pestering people..): I have asked Boots to confirm about their Allergy Nasal Spray (like an alternative to Beconase). They have come back this morning and said that it looks grain free from their initial investigation but they are double-checking with the manufacturer. I have to say I have found Boots to be great at this and don’t balk at the heavy questioning. I have a feeling it is because the person I spoke to has a coeliac relative…

The supplier of the Boots Pharmaceuticals Hayfever Relief For Adults 50 micrograms/dose Nasal Spray (100 Metered Sprays) (beclometasone) ic4534514   PL 16431/0121& 0176 have confirmed that the product is free from corn/grain derivatives.

Good news though – the new Prevalin nasal spray seems to be OK! It is a barrier type product which traps and I assume kind of absorbs the pollen/dust/airborne allergens; it’s main ingredient is bentonite clay which is extremely absorbent. This in fact makes me smile because, if you look at the ingredients, it is pretty much based on natural stuff with a few chemicals thrown in. Big Pharma catching on and cashing in?! Nevertheless, it is welcome; we need all the help we can get 😉

Prevalin™’s patented formula contains specific ingredients that uniquely deactivate pollen in the nose so it cannot irritate the nasal mucosa.

Prevalin™’s microgel formula then forms an impermeable layer on the mucosa for protection against pollen irritation.

Prevalin™ also stimulates the clearance of pollen from the body.

..that none of the ingredients used in Prevalin are derived from any kind of grain, including corn of their derivatives. We can also confirm that the Xanthan gum is derived by bio fermentation of a sugar source, which is not from grains, corn or their derivatives.

So, I took some yesterday morning to trial it and….4 hours later, no migraine 🙂 And still no migraine 24 hours later after several doses. It looks like it might be safe.  You can get it from usual suppliers including Boots, Tesco etc.

Update: I have found this is safe but doesn’t work for me very well. Also made my mouth very dry and felt all clogged up by it especially at night.

Don’t forget too that you can use any kind of wax type product as a barrier by smearing some around and up your nose to catch the pollen before it can get too far in. The most popular one is Haymax, made from sunflower and beeswax. The pure one with no essential oils is best in my view. I have also used coconut oil successfully although it does make your nose all shiny!

For these, I have been looking specifically at the conversion of histidine to histamine in the body as I thought, if we can understand the process, we can try and do something to slow the conversion down, if you see what I mean. Here’s what I found:

Histidine Decarboxylase is the enzyme responsible for converting histidine to histamine. Catechin and other flavonoids have been shown to be potent inhibitors of histidine decarboxylase in vitro19 and in vivo.20 This action has wide clinical application (e.g., allergic conditions, peptic ulcers, inflammatory processes, other conditions where histamine is involved).

Quercetin can be used, or flavonoid-rich extracts such as those from grape seed, pine bark, green tea, or Ginkgo biloba may prove even more helpful due to their better bioavailability. In particular, the proanthocyanidins from grape seed or pine bark extracts…

I have listed suitable quercetins in the Barrier Plan and, in the TGF Master List, there are several quercetins and I think both ARG and Kirkman do both grape seed and pycnogenol (Proanthanol) – look at the Bioflavonoids section.

Update: I have been managing to take Quercetin fine. That’s a first. But still not strong enough for the hayfever for me, sadly.

We musn’t forget nature’s antihistamine either: plenty of Vitamin C (but since 99% is derived from corn, be really careful about the source of it – see the TGF Master List again for specific recommendations).

Update: I have discovered that Bioforce Pollinosol Spray is TGF safe. This is a herbal spray based on Luffa, which we used to sell a lot of in the dispensary days, although it was the homeopathic version. It contains:

Of course, I checked the ethanol and they have confirmed it is from sugar beet not grain, hoorah:

all our tinctures are made from the medicinal grade alcohol, from sugar beet. The tablets are made from those tinctures, with the alcohol spun off rather than lifted with chemicals. Many people therefore find that they can tolerate them better than other ranges. Also, when the herbs are harvested from the farm, the manufacturing processes take place very soon indeed, as the herbs only have to be trundled down the track to the farm buildings rather than travel miles. So firstly no volatile ingredients are lost and secondly no fumigation/iradiation (sic)/general chemical unpleasantness is needed. Another boost for people with sensitive systems.

I will be looking more into the Bioforce range then as a result and will of course report back.

The other main area of antihistamine action is to stop mast cell reactions.

The key ones seem to be:

Also, I have been investigating Butterbur, which is a traditional remedy for migraine actually, hence me looking at it, but then I read this:

Butterbur is becoming more popular for allergic rhinitis…and it is the best studied. Butterbur and the butterbur constituent “petasin” appear to decrease plasma histamine and leukotrienes.10336 They also seem to decrease priming of mast cells in response to contact with allergens.10337

Several clinical trials have evaluated butterbur for allergic rhinitis. Most studies have used a specific extract called ZE 339 (Tesalin, Zeller AG), which is not available in North America. Taking one tablet of this extract 3-4 times daily seems to significantly decrease mediators of nasal inflammation and symptoms of allergic rhinitis.7595,10336,10337,14414 Some evidence also suggests that this extract might be comparable to cetirizine (Zyrtec) 10 mg/day or fexofenadine (Allegra) 180 mg/day for reducing symptoms.7595,14414

Butterbur should be standardized to contain at least of 7.5 mg petasin and isopetasin and be UPA free (which most on the market certainly should be). UPAs are alkaloids that can be toxic and should be removed from the natural butterbur to be able to sell it. There are some concerns about this and it should say UPA or PA free on the label. I need to do some more research on this and will report on it for you asap if I find a suitable one.

A brand name similar to the one that has been studied and that is labelled UPA-free is Petadolex. I am just investigating it for us and have a couple of questions outstanding but it is looking OK so far, fingers crossed.

Solaray also do one but they have, so far, not responded to my emails.

Homeopathics might provide a solution for us too. I thought I had found a suitable Heels remedy in Histamin Injeel ampoules but, as I was about to take it, I discovered it contains ethanol. It is about the only Heels oral vial that contains something other than sodium and water with the remedy. How annoying! Why is it always the anti-histamines they add allergens to?? Aargh. It might be OK but I am reluctant to trial it now, of course. It is sitting on my desk right this minute staring at me.

Update: I have swapped the Histamin Injeel for Euphorbium Comp. This contains luffa in homeopathic form (see above for the Bioforce herbal alternative). I have yet to try it but it has no alcohol and I am tolerating the rest of the Injeel/Comp range from the looks of it 🙂

Other than that, the best options seems to be to ask Helios or Ainsworths to make a sucrose only pillule remedy. Luffa is a good hayfever remedy we used to sell in the dispensary but they will advise the best one for you, or see a homeopath for a direct recommendation.

So, hope that brief (?) run-down of possible grain free antihistamines helps you. If I have missed any of your faves, do tell. Meantime, may all your runny noses and sneezing be mild 🙂