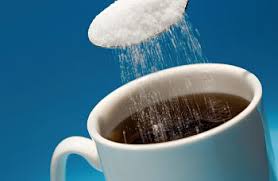 I’ve been saying this for well over a decade now: artificial sweeteners trick the body somehow and lead to weight gain so the irony of people choosing ‘low cal’ and ‘low sugar’ food and drinks which contain artificial sugars as part of their weight loss strategy is not lost on me!

Today, I see WDDTY has done a special feature on the issue which makes fascinating reading. You have to be a subscriber to read the whole thing but here is a taster (pun intended!) here for you:

The discovery that artificial sweeteners (ASs) don’t help you lose weight wouldn’t be a surprise to anyone who kept up with the scientific evidence. As long ago as 1988, clinical trials showed that adding saccharin to rats’ water supply made them eat up to 15 per cent more food than rats drinking plain water.4

That same year, a Leeds University study found the same thing in people. Tests comparing ASs with sugar as sweeteners showed that the artificial ones increased people’s appetites, making them eat more food. Why? Probably because of  “the uncoupling of the sensory and energetic components of sweet solutions”, said the researchers.5

In other words, having tasted something sweet, the body expects, yet fails to receive, the promised energy boost, so it resorts to fulfilling the expectation by eating more food.

They go on to add that the sweeteners somehow affect glucose control and affect the bacterial balance in the gut:

So the apparent paradox of zero-calorie sweeteners causing weight gain is solved. They deliver a sinister double whammy: first a rise in glucose, which is then followed by hobbling of the glucose ‘antidote’ mechanism—two huge hits that can only result in weight gain—because, as we now know, the major cause of fat storage is not excess calories, but excess glucose in the blood circulation.

In effect, the only sweetener recommended in the conclusion – and that’s probably because it is not man-made – is pure water-extracted stevia and not mixed with anything else. However, there are issues even with stevia, see my post here, for example, where I discuss the fructose issue with sweeteners too:

Agave – Healthy Or Not?

Meantime, do read the WDDTY feature if you can.