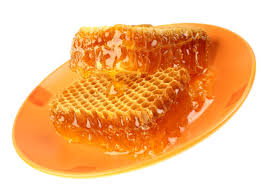 Interesting piece this morning for you on why it is better to use honey rather than sugar in your diet.

You will note that I recommend honey mostly in the truly gluten free recipes and the plans. This is mostly based on the SCD diet principle that honey is easier to digest for people with carbohydrate intolerance problems, but also because sugar mostly comes from cane, which is a grass, like a cereal/grain. A hunch maybe, but I have seen enough people with reactions to sugar, who then don’t react to honey in the same way.

I find I go a bit mad sugar control-wise if I have cane sugar but my blood sugar is pretty stable even if I have a lot of honey in a muffin or something. Part of this is, of course, my advice to have sweetness with protein to slow the blood sugar hit and insulin release. But I do wonder about it being a sort-of grain food. I don’t say it is, but the advice to use honey is cautionary in case – it’s a processed anti-nutrient food anyway so it is better to choose something else if we can.

Honey contains a lot of extra benefits, but only IF you are choosing good quality honey rather than the cheap over-processed stuff which is usually a mix of honeys from different countries. Honey contains pre- and pro-biotics, enzymes and is also easier to digest for some people, especially those with carbohydrate and gut issues eg. following the specific carbohydrate diet.

Anyway, I saw this excellent article about this very question today so thought I would share it with you.

Why You Should Ditch Sugar In Favour of Honey

I tend to buy the honey in a comb for best and try to get local runny honey for baking (I never use sugar, except perhaps coconut palm sugar which has a caramel sort of flavour which is delish). I do succumb to Sainsbury’s own runny honey for cheapness sometimes, though. Perhaps now I have read this reminder, I will try to get better live stuff.

Can anyone recommend any good honeys they use…?

2 Replies to “Is Honey Better Than Sugar?”