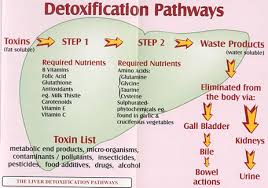 I am fed up of hearing the word ‘detox’ bandied about. It is used for rubbish programmes which will achieve nothing of the sort and, in the media variously it is described, at best, as totally unnecessary and, at worst, dangerous. So, what do I think?

I have written about detoxing before here in Detox – A Load of Old Tosh?  so have a read of that.

But, today, I read a general overview from Nutrigold which I think makes a lot of good sense too, especially with the reference to the magnesium deficiencies which are so rife. I have recently been doing routine red blood cell magnesium testing and the vast majority have come back woefully low in this so-important mineral. If you feel stressed with tense muscles or fatigued, certainly have a look at that issue. (Careful how you test, though, as I have also found that normal blood testing looks fine when red blood cell levels, the more effective but far less common way of testing, looks a long way from fine).

Nutrigold too feel ‘detox’ is an overused and meaningless term in most cases, but set out to rebut the totally unnecessary and dangerous claims. Do the right things for the right reasons and it is a crucial mechanism of health.

The truth behind the need to detoxify

Detoxis a word that most people have heard of, but if you asked them what a detox entails they may find it difficult to give a straight answer.  The issue can be further confused by incorrect media coverage, stating it is either the best thing since sliced bread or as more often found in the press, a waste of time.  So we are not surprised when a recent article in the Daily Mail claims to debunk detoxification , stating that there was no doubt that it was ‘at best…..pointless’ and even suggests that it could possibly even be dangerous.

The author of this contentious article claims, quite rightly, that our bodies are continuously removing toxins from our cells on a daily basis.  But he also goes on to state that we do so ‘very efficiently’, which is questionable, since surely this depends on the individual’s toxicity level.   It is true to say that our bodies must be doing this at some level, as our own metabolism generates toxic wastes that need to be eliminated on a daily basis.   But are our bodies able to keep up? In some cases, could we even be fighting a losing battle?  We see an ever increasing number of people with chronic conditions that, in part, we believe have arisen because our bodies are unable to detoxify at an effective rate; at a greater level than the toxins arise.

The proper naturopathic version of detoxification can be likened to the process of spring cleaning the house.  We can all go about the domestic chores of keeping the house in order and this can be likened to normal detoxification .  However, every now and again it gets on top of us.  So, we end up doing a full spring clean that will have us opening up drawers we rarely look in, rummaging in boxes in the attic, airing linen and opening the windows wide open to allow staleness and stagnation to be blown away.  Similarly, proper alkalising detoxification starts to release the accumulated toxins hidden away deep in the body’s fatty tissues, allowing full hydration, nourishment, nurture and adequate support for the body’s natural detoxification processes and elimination strategies.  All of the detoxification processes need nutritional support in one way or another.  Consider this; the average British diet is thought to be deficient in magnesium (the UK government recommend a daily dose of 375mg , the average diet is only delivering 267mg).  In an experimental situation, a cell that is toxic (acidic) does three things:  it retains its intracellular sodium (and displaces the alkalising potassium), it reduces its capacity to make energy (in the form of ATP) and allows the build-up of toxicity.  Similarly, a cell that has insufficient magnesium does exactly the same three things!  In both cases, there is a higher level of intracellular calcium, which tightens muscle tissue, causing stiffness and muscle spasms.   When magnesium is added to the diet, the cell is able to function optimally.  Magnesium, like potassium, is an alkaline mineral that helps the body to find its true equilibrium.  Rather like the analogy of a flight path, it is continually correcting the body’s proper state of alkalinity.  When stiffness relaxes and tension eases, magnesium is working its magic.  Is it any wonder that a true naturopathic practitioner often uses a much higher dose of organic magnesium than the recommended daily allowance?

We take for granted many health problems such as PMS, IBS and migraines as part and parcel of our daily lives, but detoxification can actually benefit these and many other problems, by addressing the underlying issue rather than reducing a mere symptom.  These are the very conditions that may be helped significantly by true naturopathic detoxification.   Having the control to adjust our body’s detox environment helps make our lives so much easier and much more fulfilling in the long run.  It is a journey of true empowerment, giving you the control through promoting a healthy alkaline environment.  Try a simple test to evaluate this idea for yourself; stop taking tea, coffee, soft drinks and alcohol for two weeks.  Ensure you drink at least two pints of water daily, lukewarm, not cold.  Drink no more than a pint in any one hour and sip at it, do not gulp it down.   If you really want to push the boundaries, add some fresh carrot or green juices every day!  Even consider adding some luscious smoothies.

For some people, it is going to be a much longer process than first imagined.  There is a more positive impact earlier on for those who have not accumulated much toxicity, although each case needs careful management to avoid a healing crisis, as cellular toxins may be released too quickly.  There may be symptoms such as headache, grogginess or skin breakouts during the process, if this happens you can slow the whole process down, or stop the programme while the body settles down.   Whatever the result, it is important to ensure that the detoxification programme continues until all adverse symptoms are gone.  Once a proper detoxification is completed, you will know.  You can expect a feeling of real vitality, softer skin and increased flexibility in the joints and muscles.  Some individuals experience a feeling of real connectedness, heightened creativity and even a new perspective on life.

So, how come the scientific community back the case against detox?  It is true that the word is becoming overused and in some cases, used inappropriately.  Short term packaged detoxes may help those who already have a healthy lifestyle (and it is possible that they are often the ones who will do detoxes).  But they could be missing out on a real treat.  There is an art to detoxification, using only safe and natural supplementation and gentle techniques.  This ensures the flow of detoxification, allowing the kidneys, the skin, the lungs or bowel the freedom to eliminate with ease.

The argument that is being put forward is that our bodies are well equipped to deal with all today’s toxicity and there should be no reason for any additional detoxifying treatment, either of the ‘pointless’ or even the ‘dangerous’ kind.  However, we beg to differ.   All supplements have undergone some rigorous scrutiny to gain a place on the EU Positive List for food supplements.  Do supplements need any further approval?   On the other hand, if we carry on with life’s excesses, endure continual stress or exist on junk foods, we will eventually need to step away and give our body that much needed break. Our lifestyles, however, rarely allow this to happen, so we should not be surprised when our bodies and minds show signs of breaking down.  To add to our burden, high levels of traffic fumes, pesticides and so on, will not be going away any time soon.  These stresses to the body affect us all and, therefore, we consider it dangerous not to be giving our bodies the right detoxification tools to cope with our modern lifestyles.

Too right, I say. Check out the detox factsheet for more specific info on detox mechanisms in the body, where toxins come from and how to lower your daily intake.

One Reply to “#Detoxification – Needed Or Not?”