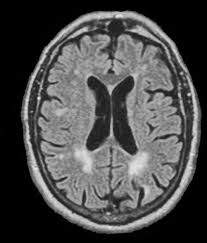 That’s fascinating, isn’t it? I would imagine we are looking here at neurological damage caused by the gluten.

Thirty-three people aged between 19 and 64 with biopsy-confirmed coeliac disease were divided into subgroups based on their primary neurological complaint:

Imaging was used to measure the density of the grey and white matter in the brain, the neurochemistry and the volume of the cerebellum.

That got me interested since I am a headache coeliac (and non-coeliac gluten sensitive!). What are these white matter abnormalities?

Apparently these show as scattered bright spots on the MRI scan. White matter in the brain refers to the fibre tracts that carry information within, to and from the brain. The spots on the scan are thought to be changes (ischaemia, lessening) to the blood flow in the tiny blood vessels snaking through the brain. They happen more as we get older. They are seen as lesions in MS, in those with hypertension, diabetes and high cholesterol, in those with infectious and other inflammatory conditions.

They are seen in migraine/chronic headache sufferers probably because this is very much related to lessened blood flow in the brain and inflammation, hence, I think, why I find coffee helps mine as it temporarily aids blood flow.

The researchers believe that MRI imaging could be used as a measure of progress of neurological changes in a sub-set of coeliacs. Read the abstract report here.

Not ‘all in the head’ then, but we can see some of it is. Literally 🙂

One Reply to “#Coeliacs Have Measurable Brain Changes”